We can change friends but not neighbors 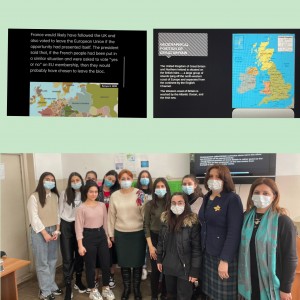 “We can change Friends but not Neighbors’’
The United Kingdom Geopolitics
The problem of neighboring countries is currently one of the most disturbing issues. It is a serious matter of concern in our country, and in the light of recent events it is really burning. But it is always easier to discuss something on the example of others. And we will do so.
The students of grade 10-3 (History-Law stream) analyze the geographical position of Great Britain and its relationships with France. France and the UK have had long and troubled history of rivalry and alliance. As a metaphor for the relationship between the UK and France, the term “My dear enemy or frenemy’’ best illustrates their coexistence. By all means, geographical position is the main factor in the history of the country. The power of geographical boundaries is great. Yet while neighbors can be a source of friendship and support, they can also be a source of enmity and indifference.
Relations between the UK and France are often portrayed as a history of at best mutual suspicion and at worst open hostility.

Even their alliance in the First and Second World Wars didn’t end their mistrust.

While the history of Franco-British relations has often been marked by tensions, it has also been shaped by cooperation. In times of crisis, the UK and France have formed a partnership of extraordinary closeness. From the Foreign Office proposal to form a union of the two nations in June 1940, to joint military action in Suez in 1956, wars and international crises have drawn the UK and France together.

The Channel Tunnel, which connects the two countries beneath the sea, might have strengthened the social and cultural connections between the UK and France. Britain and France recognized that they had more to gain from working together than being rivals. More recently, the two countries have shown that pragmatic cooperation can be just as strong as cooperation born of crisis.